Mid-day Meals and Their Role in the Education of Children There are millions of children in our country who face many obstacles in their education. Socio-economic causes are the main deterrents to education, apart from others like geographical difficulties. However, it is important to keep working on educating such children for the many benefits it will provide to them and to the society at large. Some of these benefits also act as incentives for students to come to school and parents to send them. The mid-day meal is one of these. Mid-day meals play a vital role in the education of underprivileged children.

What are mid-day meals?

The Central Government of India established the mid-day meal scheme in 1995 to give free prepared meals to children in government and government-aided primary schools (classes I–V; ages 6–10 years). The National Programme of Nutritional Support for Primary Education had planned to cover all government schools. However, due to institutional constraints, only a few states promptly ramped up the programme.

However, between 1999 and 2004, the programme’s coverage expanded in many states. This was after the Supreme Court ordered state governments to provide prepared lunches in primary schools.

In 2004, 32% of Indian girls aged 6–10 years were covered by the programme, which increased to 46% by 2011 as significant funds were provided to the plan. Throughout this time period, boys received comparable coverage.

The study also discovered that the 14 states that implemented mid-day meals in the late 1990s had improvements in child height before the rest of the country. Following the Supreme Court rule, these states expanded the mid-day meal programme in the 2000s.

The findings imply that acting during the primary school years can make significant benefits to lowering future child stunting, particularly given the cumulative exposure that school nutrition programmes can provide. Because they target numerous underlying factors of undernutrition in vulnerable groups, these mid-day meal programmes have the potential to stimulate population-level stunting reduction.

A new study discovered that girls who received free food in elementary schools as part of the mid-day meal programme had children with better growth. The study, titled ‘Intergenerational Nutrition Advantages of India’s National School Feeding Programme’ was published in the journal Nature Communications.

The study examined whether mid-day meals help intergenerational increases in a child’s linear development. This was done using nationally representative data on mothers and their children from 1993 to 2016.

How are mid-day meals helping

School, without a doubt, plays a vital part in the socio-economic development of society. It is a place where youngsters from all origins mix, establishing a culture of unity and brotherhood. Their education at school prepares them to reach their goals and be successful in life. However, the majority of students in government schools come from low-income families. Even when education programmes such as Sarva Shiksha Abhiyaan are being introduced, some youngsters are forced to pick jobs over school due to financial constraints. And this is where the true value of a mid-day meal emerges. The mid-day meal serves as an enticing incentive for parents to take their children to school. This way they can ensure that their child will receive at least one plate full of food for the day.

Social structures are used to channel policy actions. The resilience of these social institutions guarantees that social differences are maintained and that rewards are distributed based on one’s place in the social hierarchy. All policy interventions began in this manner. In the case of Mid Day Meal, the situation is rather different. It is worth noting that MDM governmental intervention is not included in that assumption of social structure. Rather, it has opposed the influence of an inequitable social structure by allowing disadvantaged students from low income categories, as well as female students, to complete their studies. Furthermore, advancements in girls’ education will lead to benefits in social development. Continued education postpones marriage and improves women’s participation in family decisions.

The Government of India encourages civil society organisations to participate by providing enough support in order to enhance the benefits of mid-day meals. These include

Smile Foundation understands the concrete and long-term impact of a mid-day meal. Thus, through our various programmes we are providing meals and good nutrition to as many children as possible. As a result, it takes on the responsibility of providing mid-day meals for impoverished children.

Know more about our work here. 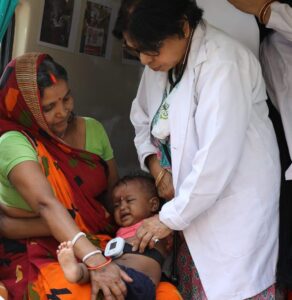